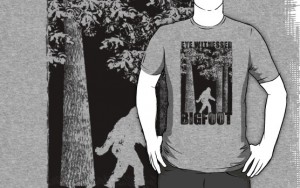 10 Million Dollar Bigfoot Bounty season premiere on Spike TV – Oh yea, I had to check this out! Okay, so I understand that many new species are still being discovered, but could a massive primate such as the Sasquatch be roaming the forests undetected? If so, I’m sure one of the challengers on the 10 Million Dollar Bigfoot Bounty will find out! Actually, I think this mystery has already been solved as Justin has already killed two Sasquatches, right? And the other challengers appear to be quite skilled – one dude even broke out a toy lightsaber to use as some sort of Bigfoot trap. I was also extremely impressed with the evidence recovered from the hunt – moss, pine nuts, random bone, scat, scat and more scat. Okay, I’ll tone down the sarcasm as I know it’s all an act with the challengers and the over dramatic judges. Overall, I really enjoyed the first show and it’s going to be entertaining watching the mix of personalities.
This new Bigfoot Bounty series has certainly prompted the Nocturnal Prototype rewind post for our Eye Witnessed Bigfoot graphic t-shirt. This shirt design was crafted from my curiosity with the topic of Bigfoot. I love all the eye witness stories and the science used in these Bigfoot investigations. Of course, my favorite is the 1967 Patterson film at Bluff Creek (also known as the Patterson–Gimlin film). If you share the same passion for Bigfoot (and independent artists), get your Eye Witnessed Bigfoot Nocturnal Prototype graphic t-shirt today!
Click HERE
Stay connected – more Bigfoot t-shirts to come!