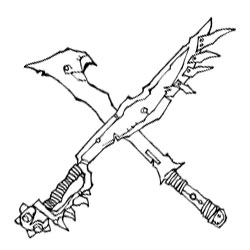 Maybe I should start by providing some explanation for the term LARP as I’m not quite sure when this term became popular (I guess I’m assuming its popular now) and some of you might be asking – what in the world does LARP mean?  Wait, first let me clarify that I’m definitely no expert with this topic and any details that I provide are just the best of my understandings.  LARP stands for Live Action Role Playing.  From what I know, that basically translates to a group of people who all get together in costumes that represent a famous or popular fantasy character and play out the actions or plot of that character’s story.  It sounds like there are rules and guidelines put in place for the game of LARP and I’m sure there’s a goal or objective so a winner can be determined.  I guess LARP could be considered as a form of theatre.  Although the first LARP games were played around the late 1970s, it wasn’t until the beginning of this year that my step-daughter (a sophomore in high school) told me all about it.  She described that the kids at her high school were mostly into the renaissance and medieval LARP costumes.

LARP graphic t-shirts!  I know there are many varieties that already exist, but I was inspired to create a series of LARP graphic t-shirts with that unique Nocturnal Prototype touch to it – LARP shirts that a participant could show-off when not on the battlefield.  Good idea, bad idea?  I’m guessing that there is an interest for LARP shirts – it’s just a matter of our designs and if they appeal to the LARP community.  I’m up for the challenge…more to come!